For starting a new family tradition 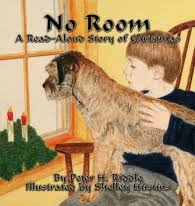 “No Room” by Peter H. Riddle, Illustrated by Shelley Hustins Christmas is a time for celebration, for families, and especially for the giving of gifts, and there can be no greater gift than to share one’s home. Kindness brings its own rewards, and sometimes more, as the family in “No Room” discovers when a stray cat appears on their doorstep one snowy Christmas Eve. The oldest boy wants to take the cat in, but there is a problem. “We haven’t got room,” Father said, “for another. We already have seven pets, and your brother.” Just before bedtime, the children gather around to hear their father read the beloved Christmas legend about Mary and Joseph being turned away from a crowded inn on the eve of Jesus’ birth. What happens next can only be described as a miracle.

The touching prequel to Greg Kincaid’s bestselling novel “A Dog Named Christmas”, “Christmas with Tucker” is the moving story of George, a young boy dealing with the loss of his father, and the dog that comes into his life to offer him hope and a touch of courage. It is the winter of 1962, and Kansas is hit with one of the worst blizzards in its history. It is during this cruel season that twelve-year-old George is called upon to endure more than even most grown men could withstand—the death of his father and the upkeep of the family farm that is his legacy. When his mother and sisters leave for Minnesota, George has only his grandparents and the companionship of Tucker, an Irish setter, to help him persevere through these most difficult challenges. Can he find the strength to walk the road that leads to healing, finding his true self and ultimately becoming a man? “Christmas with Tucker” is a classic Christmas story about a young man’s love for his dog, his family, and his farm.

Set in the Deep South, William A. Armstrong’s Newbery Medal-winning novel tells the story of the great coon dog, Sounder, and the poor sharecroppers who own him. During the difficult years of the nineteenth-century south, an African-American boy and his poor family rarely have enough to eat. Each night, the boy’s father takes their dog, Sounder, out to look for food and the man grows more desperate by the day. When food suddenly appears on the table one morning, it seems like a miracle. But the sheriff and his deputies are not far behind. The ever-loyal Sounder remains determined to help the family he loves as hard times bear down on them. This classic novel shows the courage, love, and faith that bind an African-American family together despite the racism and inhumanity they face. Readers who enjoy timeless dog stories such as “Old Yeller” and “Where the Red Fern Grows” will find much to love in “Sounder”.

For the younger set 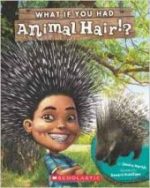 Sandra Markle and Howard McWilliam ask this question of kids and generate some pretty wild ideas. Sparking imagination and at the same time, informing about all sorts of species of animals, this book is rich in colorful illustrations and facts about animals that even many adults probably don’t know. A great book to share with your children! And while you’re at it, why not consider…….

The second of three “What If…” books from Sandra Markle and Howard McWilliam! It’s just as zany, just as colorful, and loaded with interesting information about what it means to have the teeth of a snake, a giraffe, a beaver, a shark, and so many others! The scientific information woven into each fun-to-read section stirs the imagination and is sure to liven your holiday dinner table conversation. Then, why not make it the triple set………

What If You Had Animal Ears!? is the third of the series of imagination-building books that are truly as much fun to share as they are to read. Inspiring kids to discover what it might be like to have the ears of other animals is just one cool aspect of this book. While entertaining and informing, it’s also helping children learn empathy, the ability to put themselves into another’s shoes (or ears, as the case may be). Guaranteed to keep your kids laughing, chattering and imagining all the way through the holidays and beyond.

Seth Casteel captures new sides of our old friends with vibrant underwater photography that makes it impossible to look away. From the water’s surface, it’s a simple exercise: a dog’s leap, a splash, and then a wet head surfacing with a ball, triumphant. But beneath the water is a chaotic ballet of bared teeth and bubbles, paddling paws, fur and ears billowing in the currents. Each image bubbles with exuberance and life, a striking reminder that even in the most loveable and domesticated dog, there are more primal forces at work. “Underwater Dogs” gives playful and energetic testament to the rough-and-tumble joy that our dogs bring into our lives.

Since the wolf first snuck into the caves of our ancestors to take warmth from the fire, dogs have been man’s constant companion.”  Dogs” multi-award-winning photographer, Tim Flach, delves deep into the psyche of humanity’s enduring bond with Canis familiaristo to present an exquisite study of “man’s best friend.” The images featured in “Dogs” promise to deliver one of the most appealing, popular, and exciting photographic tributes to dogs ever published.