Feeling like your voice needs to be heard about Animal Welfare matters? The most effective way to make change happen doesn’t have to involve marching around with your fist up or waving a sign. Our country’s legislative process makes it possible for citizens to change laws by working with their elected officials. A politely written, thoughtful letter written to your representatives in the Senate and Congress can change minds and make more effective laws get passed. This is especially true when your letter contributes some positive ideas about how to best deal with certain animal-related issues, and includes a list of signatures from other folks who feel like you do.

A website called GOVTRACK.COM makes it easy and convenient to search all the bills pertaining to animals (or any topic you want to search, for that matter) that have been submitted to the US Congress and Senate.

At this site, you can find out which legislator introduced the bill and what its current status is. You can even read the complete bill, word for word. We recommend that if you’re going to speak out about any bill or law, it’s very important that you read and understand the entire document and don’t just take the word of someone else as to what’s in there. This way, when you approach the legislator about the bill, they will judge you as a credible contributor to the process and take you seriously. Legislators are contacted by a lot of constituents every day, and they can tell pretty quickly who’s just a complainer and who’s seriously interested in getting good legislation passed. Do your homework if you want your ideas to be seriously considered.

Many bills are amendments to laws already in existence. So you may need to back up and read the existing law and compare it to the changes being proposed, in order to make sure you know what you’re agreeing or disagreeing with. Again, don’t take someone else’s word for what’s in a law or bill. Take the time to read it for yourself. Many well-meaning people have been hoodwinked by others with a particular agenda when it comes to communicating the content of existing or proposed legislation. The best animal advocates are the ones who truly understand what they’re advocating about.

If you find a bill that you think is a particularly valuable piece of legislation which needs to be passed into law, you can follow up with action:
1) Contact the author of that bill to congratulate them on their effort and to offer your assistance with networking among the public to gain support for that legislation. If you feel some part of the legislation should be re-worded to eliminate some ambiguity that could lead to misinterpretation or loopholes later on, let the legislator know and give them your suggested change. Legislators are only human beings; you may be a human being with a better command of the English language. Put that knowledge of yours to work in helping your representative craft the most solid legislation possible.
2) Contact your local media to make them aware of the bill and tell them why their viewers, readers and listeners would want to know about it. Media can spread the word about important issues like this a lot faster than an individual can, and the media knows that animal issues are of great concern to the public.
3) If you live in New York State, Animal Advocacy Day is YOUR opportunity to meet with your State representatives in person to give them your opinion on animal welfare issues. The 7th Annual New York State Animal Advocacy Day event is coming up soon: June 5, in the Well of the NY State Legislative Office building at the Empire State Plaza. From 9:30AM to 12PM, animal welfare and animal rights groups will be displaying information about their services and offering assistance to attendees about how to effectively discuss your concerns with your representative. Then at 11:30AM, attendees can personally visit their representatives’ offices to meet with their lawmakers and discuss Animal Advocacy issues. This is a wonderful way to have direct input into the laws that protect New York’s animals and it’s a lot more effective than marching around carrying a sign. After all, negotiating is a give and take process that requires that both sides be heard clearly to develop mutual understanding and acceptance. This kind of process can’t take place in an environment where people are shouting slogans and sound bites. Constructive conversations between informed citizens and legislators are the way the most effective laws get passed. 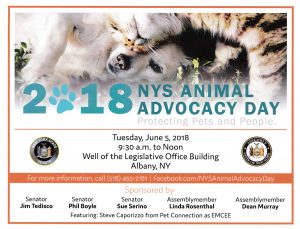 May 2, 2018 By Melinda Plasse In Newsletter 4 Comments Off on News About Bills & Laws Pertaining to Animals advocateanimalbillcatcrueltydoglawlegislatelegislationlegislatorneglect