Message From The President

Hello! Glad to know you’ve clicked open another TASP e-newsletter. We are very grateful to you for caring enough about animals and people to pay attention to these newsletters. At The Animal Support Project, we are convinced that what we’re doing, supporting animals and their owners through tough times, is truly the missing link in animal welfare; and we’re glad you are either in agreement with us or even just perhaps curious to learn more.

This is the part of the newsletter where I typically write about the good things that happen when neighbors help neighbors solve the problems that break families apart. But this concept wasn’t just my bright idea. It took input from a handful of people who all met by some kind of bizarre coincidence while and immediately after deploying for Hurricane Katrina. That was where we witnessed for ourselves how destructive it can be for people in crisis to lose their companion animal. Back then, few seemed to be addressing that aspect of animal or human welfare. Everyone was in rescue-mode, but either you were an “animal person” rescuing the animals, or you were a uniformed first responder of some sort, rescuing the people. And so, as can be expected, many animals and many humans were disconnected forever from each other, and many animals and humans suffered immensely, even though the best of intentions were truly meant by both sides.

Animal rescue was then and sometimes still is, the removal of a pet from a challenged home where the animal was established, known and loved, and the placement of that animal into another home that has been, in best cases, investigated through an application, an interview/home visit and a few phone calls to references provided by an adopter. In between those two steps, sometimes an animal shelter might be involved. The expectation was and sometimes still is that somehow, it is more humane to do this than to help the pet’s original owner overcome their challenge and keep their pet. The expectation was and sometimes still is that the new home will not encounter any challenges that could cause the animal to be in jeopardy again during its lifetime. But in reality, both scenarios are a gamble.

TASP prefers to place our chips on the original home, as long as there is evidence that conditions can be brought up to a state that is safe and maintainable for the animals and the humans. That means there is a path that can be cleared from crisis to stability, and the owner is committed to working with us to make that journey. We combine our disaster response experience and skills with the funds and supplies provided by like-minded people to bridge the shortcomings in the pet’s home. This way, that animal doesn’t have to experience homelessness and the owner doesn’t have to experience more loss than they already have. After all, a pet is not homeless until it is taken out of the home; either by the owner who has come to believe they have no other choice or by a well-meaning rescuer who is convinced they can find a better place for that pet, given enough time and resources.

When people suffer a loss: death of a spouse, divorce, job loss, eviction, loss of their health/youth, it’s more common than not for them lose their trust and confidence, to feel like a victim, and to want to assume the fetal position in some dark corner. Put in this situation, many will judge themselves losers in the game of life; they wouldn’t need someone from the outside pointing that out for them. Having a loving pet at that moment in time can turn that self-image around and re-inspire a person to get back on their feet and fight the good fight. After all, a pet loves you no matter where you’re sleeping that night; no matter what’s for dinner; no matter who else has abandoned you. They encourage you. They are your cheerleader, your preacher, your mother and your favorite teacher all wrapped into one furry/scaly/feathery package, saying, “You are the most important thing in my world. You have value. You and your opposable thumbs and large brain are going to make everything turn out alright.” Now, should we take that pet away from that person in crisis, confirming the sense of loss and fear that both pet and owner can suffer? Or should we work to stabilize the situation for pet and owner so the two of them can face the world together, overcome their challenges, and maybe even pay it forward down the line?

Some of you probably knew Mitch Valerien, one of the people who helped us start The Animal Support Project. She just passed away on March 15 too young and very unexpectedly. Early on in our organization’s evolution, Mitch was one of the people whose input and elbow grease helped shape this organization into the pet safety-net it is today. Mitch cared about animals, but she also cared deeply for the people who own animals, regardless of their income or their education level, or where they lived or whether or not they were New England Patriots fans. She was devoted to TASP’s mission; she helped define it. Alot of animals are sleeping safely with their beloved families, and a lot of people are sleeping safely with their trust in humanity restored because of Mitch and this organization she helped develop.

The mission of TASP doesn’t die with when one of us dies. It’s already spreading like a virus – a GOOD virus! Today, you can google “Pet safety net,” or “Pet retention program,” and all sorts of websites full of resources come up, including The ASPCA’s Position Statement on Keeping Pets and People Together.

Ten years ago, when TASP started, those kinds of resources and commitments were extremely hard to find, and even now I occasionally have to explain why we do what we do.  But it’s the rare occasion now. Mitch’s legacy of caring for animals AND people will continue to flourish and will continue to encourage the partnerships that hold families together. I can’t think of anything that would make Mitch more proud. 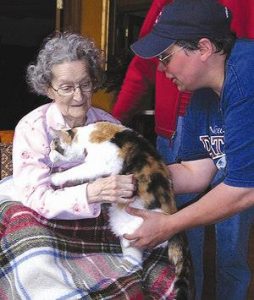 April 27, 2018 By Melinda Plasse In Newsletter 4 Comments Off on Message From The President animalcarecompanioncompassionfriendhealthymercyneighborpeoplepetrescueretentionsafe