Keepin’ It Together – Creating a Future for Marianne’s Cats

If you had met Marianne ten years ago when we first encountered her, you’d be meeting a well-educated woman in her 70’s who was using her GE retirement funds to support herself and a handful of stray cats. Together they  lived the good life at Marianne’s little acre of rural paradise not far from where I am writing this. She was an uncommonly strong-willed woman, well-read, with a dry wit and zero tolerance for people who treated animals or people unfairly. She was stubborn as a mule and could chew into someone like a badger if she thought they needed setting straight. Marianne had grown up a farm girl and appreciated the solitude and peace of country life, even as a widow, with her grown daughter living with her own family many miles away.

Back then, just like now, well-meaning people from town would drive their unwanted cat out to some rural location near a farm, assuming it was more humane to drop the cat there than to take it to the shelter. In their minds, the shelter would just kill their cat. But out here, under the sun and stars, the cat would live the idyllic Disney life, sustained by a lifetime supply of mice and milk from the cow barn. As someone who grew up in the country, I can testify those people assumed incorrectly. Life for a stray cat in the country is anything but idyllic. It’s constant struggle; competition for food, water, a safe place to sleep and raise young, and the constant pressure of random sickness, attack and injury. It’s one of the reasons why stray and feral cats have large litters: because nature knows many feral-born kittens will not make it to adulthood.

Marianne understood this and kept her little colony in tip-top order. When a new cat would show up in her yard, she would use her own trap to capture it, then drive it to Hoof n’ Paw Vet Service at the Valley Falls-Cambridge line, to have it altered, vaccinated and doctored for any illness it may have had. It was a reasonably well thought out plan and, after the initial veterinary investment, it afforded Marianne a resident varmint patrol around her little mobile home for just the cost of cat food and fresh water. It also offered her the pleasure of free entertainment, watching for hours as the cats lived their lives outside her picture window. Eventually, each cat would be friendlied enough to be awarded a name and  an afternoon or evening indoors on Marianne’s couch. Cats came and went as they pleased there and the protocol suited everyone concerned.

As time went on, GE’s stock began under-performing. And in ensuing years, the value mostly declined, leaving Marianne’s retirement income thinner and thinner. But the arrival of new wandering feline strangers from the farm down the road continued, and seemed to even increase. The cats apparently didn’t scrutinize the Wall Street Journal sufficient to recognize their food and medical bills were straining Marianne’s wallet.  Nonetheless, Marianne made sure they ate regularly, while she pinched her pennies. This was right about the time she met up with The Animal Support Project.

We’d gotten a call from Hoof n’ Paw, asking us to call on this nice lady who was having trouble keeping up with fixing the cats invading her property. They informed us about her past efforts and were concerned that more cats than ever seemed to be arriving at her little oasis. They wondered if there was something we could do to help and there was. We teamed up with Marianne on several occasions to trap numbers of cats at once and have all of them vaccinated, altered and tested. Then we’d adopt them out  for her to keep her burden down to a reasonable number.

2016 was a hard year for Marianne. By that time, she was in her 80’s. She’d suffered a stroke and after that, had spent just enough time living with her saint of a daughter to get back on her feet. A proud person of Marianne’s age has trouble being dependent on their child. It is not a role they can adapt to readily. So after recovering enough to be deemed safe on her own, Marianne returned to her little paradise in the country where she didn’t have to live on other people’s schedules or hear the unfamiliar sounds of suburban life. She returned to reading from her own library, shopping for herself and enjoying the 24-7 entertainment of her beloved cats outside and inside her home. A niece who lived nearby took over for TASP, looking in on Marianne and doing trap-neuter-return on her property to maintain population control for the cats, and Marianne’s brother, who lived just down the road, did the “manly stuff” around the property to keep her home running safely.

In late summer of 2017, Marianne’s daughter called to ask for our help again. Marianne had broken her hip. She was now almost completely deaf, quite small and frail, but nonetheless, she was raising hell with the doctors at the hospital, wanting to go home as soon as possible to be in her own element with her cats. Her brother was by this time also quite up in age and physically not able to support Marianne around her place the way he had in the past.  We committed to Marianne’s daughter to round up the cats indoors and out and begin the process of finding them new homes where they could be safe. Luckily for all concerned, TASP has Tess and Tim Newbury on our volunteer team. Thanks to them, we were able to capture all 13 of Marianne’s cats, including three kittens born to a newcomer female who had not yet been fixed.

With the generosity of Marianne’s daughter, we were able to buy flea collars for all the cats as well as having all updated on vaccines and tested for disease. We returned a handful of them to Marianne’s mobile home so they could live indoors with Marianne when she came home from her hip rehabilitation, and the rest were kept happy in a large temporary cattery we erected in her garage with materials we stock for such things. Tess and Tim continued to visit the cattery each day to maintain things there and they would look in on Marianne, walk her trash barrel to the road on pickup day, and make sure all was well. Seeing Marianne, we all knew they would not have to do this for long. Meantime, in the background, Debbie D’Angelo, our volunteer whom we share with Noah’s Kingdom, Kitten Angels and other capital district cat rescues, was lining up plans for the cats to be transferred out to these wonderful local rescues.

Marianne passed away peacefully in her beloved home one morning from what first responders deemed a massive heart attack.  They said there was no sign of suffering or panic at the scene; death was swift and merciful. Her last moments were no doubt shared with her little family of cats, and now she was asleep forever, no longer worried about the things we on this earth concern ourselves with. She died as she had wished to: not in a nursing home, not in a hospital bed, not away from what was so loved and so familiar to her. I choose to believe this was her reward for a life righteously lived. And I think she died at peace with her situation, knowing TASP and her family would not abandon her cats.

What made it possible for TASP to help in this situation? Well, having the support of Marianne’s family was a key contributor to the success. This was an expensive endeavor. TASP has limited funds to work with in comparison to the number of requests we receive. So having the financial help of Marianne’s daughter was essential to get so many cats cared for properly. TASP stocks  donated kennels, fencing material and cat supplies so we can erect a cattery like this when needed.

TASP was honored to have known Marianne and her daughter, who, by the way, has her mother’s strong will and dry wit and was a real treasure in making this project work. We feel blessed that we can network with such kind and considerate rescue groups in our community who will help us with big projects like this. And we are proud to have volunteers who are committed enough to our mission to go out of their way for months to ensure that Marianne’s beloved cats weren’t left to scatter on their own.  I believe everyone involved in this project feels we did what Marianne would have wanted and we share in the hope that we can also someday leave this world with the dignity afforded to this good woman. 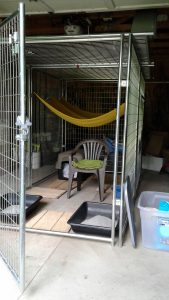 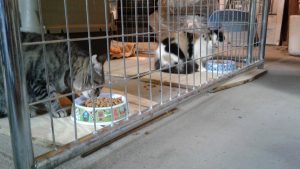 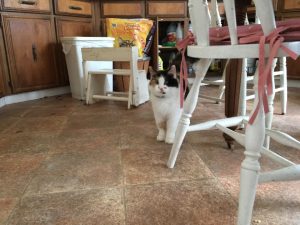 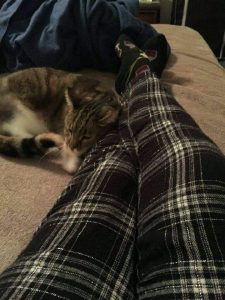 April 28, 2018 By Melinda Plasse In Newsletter 4 Comments Off on Keepin’ It Together – Creating a Future for Marianne’s Cats carecatcatteryfamilyfarmfeedferalfriendkittenneighborrescuestraysupporttrap