The Next Chapter – Update on Mitch’s Dogs

With 2018 nearly over, we realize what a challenging year this, our tenth year, has been. Losing Mitch Valerien in March was the worst thing that ever happened to our little group, and it was so totally unexpected, the cause still not fully understood, even the most optimistic of us probably felt like the floor was pulled out from under our feet. So it is easy to imagine how much worse that horrible event was for Mitch’s dogs. Without the ability to understand even what little we knew about Mitch’s death, these animals went through a life-altering change in 2018. Living alone, Mitch was everything to these dogs: mother, father, nurse, chef, janitor and UBER service….TASP owed it to Mitch to do our best to help her animals get to the next chapter in their lives as painlessly as possible. And thanks to the kindness of our community and the resilience of these dogs’ spirits, we have some very positive news to report to all of you.

Andy: “The Flower,” is now living a loved, safe and joyful life with Lea, a local veterinarian who has a soft spot for senior dogs. And BTW, she also has a very friendly, sweet black lab mix female for Andy to play and snooze next to. This gentle guy was very bonded to Midnight, Mitch’s little black lab mix female, so it was especially gratifying to have Andy find a home with another friendly female who resembles Midnight so much. Andy’s new Mom is a “foster failure,” just as Mitch was when she originally adopted Andy from Labs4Rescue so many years ago. The first time we contacted Lea to bring Andy to an adoption clinic, she asked to adopt him because he had grown so content in her home and she’d grown so fond of him. Lea writes in her latest update, “He’s doing great, a real sweetie and has adjusted to life with me very well. Everyone loves him. His sister is forever pestering him to play, sometimes he’s happy to and other times he just patiently ignores the biting at his head and feet (Hadley can be a pill!)” Andy’s new life is truly what Mitch would have asked for if she could. 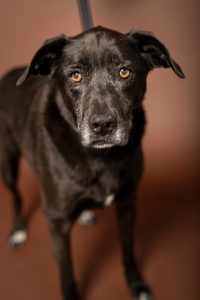 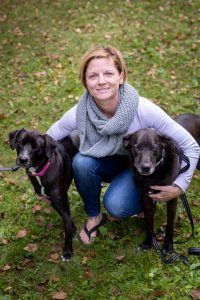 Click on Andy’s portrait to watch a video of him and Hadley playing together.

Benjamin: “The Forever Puppy,” was the first of Mitch’s dogs to be adopted, and the oldest! Thanks to Tracy, Mitch’s childhood friend in Rhode Island, Ben lounges on the carpet next to Tracy’s desk while she’s working from home, just as he did at Mitch’s house while she worked from home. Ben’s got a family who adores him and makes him a part of everything they do. And he has a little girlfriend to snuggle up and flirt with whenever he wants to. Tracy’s latest report: “Ben is doing great. He has been a great addition to our family. We love taking him for rides and he loves just being with us. We are truly lucky to have him.” Can you imagine how happy this would make Mitch? 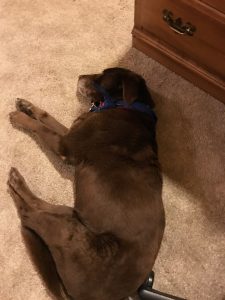 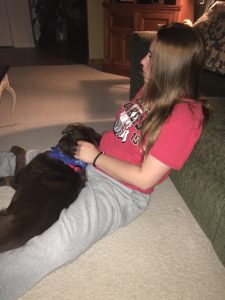 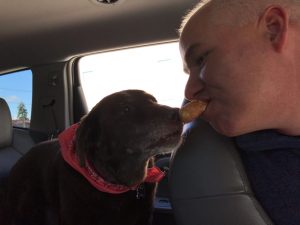 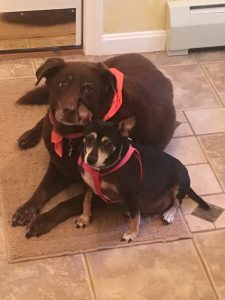 Billie: “Sweetheart,” Billie was the dog who seemed to suffer the most when Mitch passed away. For awhile, we couldn’t figure out why Billie was physically failing. But once she settled into Lynn’s home in farm country, just outside of Fort Edward, Billie’s condition began to turn around. We discovered Billie’s physical decline was just a symptom of her grieving! Lynn happened to be her Vet Tech at Borador Animal Hospital when Mitch was still alive. After Mitch’s death, Lynn’s heart went out to the old dog with the huge benign tumor on her back, who suffered so profoundly from the loss of Mitch. In a recent email, Lynn told us, “Everyone in my family just loves her. She fit in here like she had always lived here.
Although I am sorry that it was necessary to rehome her I am honored to have her as it is the only thing I could do for Mitch.” It’s clear Lynn adores Billie and Billie’s physical improvement since moving in with Lynn testifies to how happy she is there. Lynn even prepares home-cooked meals for this noble old dog! Now, Billie’s latest chapter is truly a happy tail. 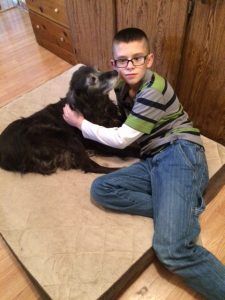 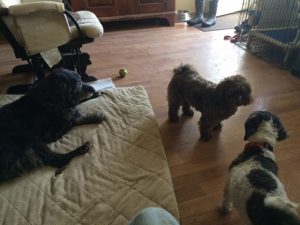 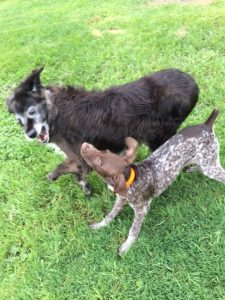 Midnight: “The Little Sister,” also hit the lottery. She was adopted by Ally, who works at Upstate Veterinary Specialties. Midnight has a much smaller pack now: just her and a dog-friendly cat, so she gets loads of attention and love, and doesn’t have to share her Mom with a lot of other dogs. She even gets to go to work with Ally, who tells us, “Midnight is doing wonderfully. And feels like she has always been a part of my life. I love her already!….. I am so glad that I found her. It’s been such a positive experience and I am looking forward to giving her a perfect home after going through so much. Her story truly touched my heart.” Ally’s update really touched all of our hearts at TASP. Little Midnight is surely blossoming in this new life of hers. 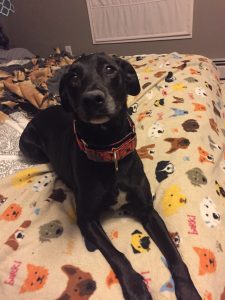 Mallory: While the “Little Mama” is waiting for her own forever home, she’s fostering with the Plasse’s, sharing the front zone of the house with Hammond (Rich & Melinda’s senior Rottie mix) and Desi, the deaf senior Jack Russell Terrier from TASP’s hospice program. Mallory enjoys her role as the only chick in the crowd, and the male dogs seem very willing to have Mallory direct the day’s activities. Rich tells us, “Mallory’s showing us every day what a terrific gal she is by walking to and from the play yard without even being leashed. She barks when company comes and loves lounging on the self-heating dog bed Hammond loaned to her. She’s such a cheerful girl…. her tail wags so hard when she sees me, it sounds like she’s beating a drum. She’s a really good dog!” 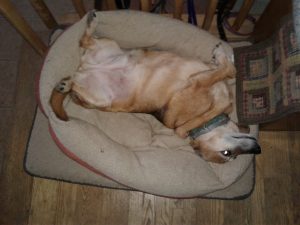 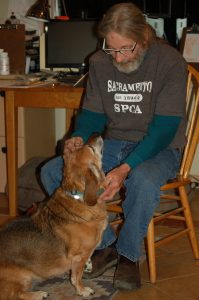 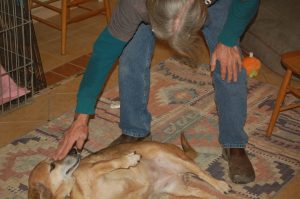 Sadie: “Cover Girl” is now officially a Canine Good Citizen thanks to her foster Mom, Lucinda. While she waits to be adopted to her forever home, Sadie shares the foster home with two cats and two male mini dachschund mixes. She enjoys the daily walks Lucinda takes her on in their quiet neighborhood and one of her favorite things to do is to snooze with her dog and cat friends on Lucinda’s big front window seat. With her good manners and her magnetic personality, it’s just a matter of time before Sadie finds her special person to adopt her; but in the meantime, she’s thinking foster life is mighty sweet at Lucinda’s. “Sweet Sadie is an eager-to-please girl. She relishes car rides and outdoor walks and hikes, but is also content to nose around the back yard or sit by the window to watch the world go by,” according to Lucinda. Sadie  certainly has matured and is nothing like the wild-child she was years ago when Mitch took her in. She’ll make someone a fantastic companion. 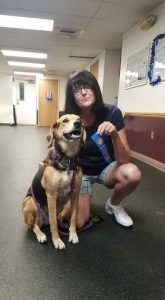 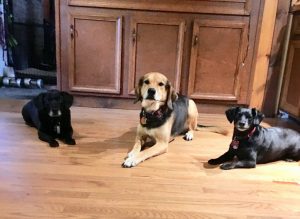 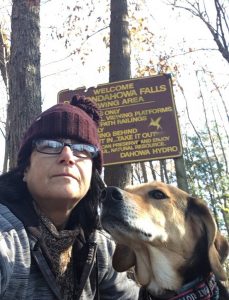 Zach: The dog we were most worried about being adopted was our “Wingman.” With his separation anxiety, Zach presented a big dilemma for anyone who worked outside the home. Fortunately for him, Bill came with his family to the Petapalooza adoption event at Curtis Lumber in Hoosick Falls earlier this year. Bill had just suffered the devastating loss of his wife. And being retired, he found himself with way too much alone time. Zach’s larger-than-life personality caught Bill’s eye from the get-go and before long they both knew they needed each other. The rest of the story is better than anything we could have written for Zach. Bill and Zach are a team now, doing everything together at home and on the road. Bill’s minivan is the perfect vehicle for these two bachelors to cruise to the park for a nice walk or to run errands in town. And Bill says Zach is like his shadow, always right behind him and ready to participate in any activity, especially climbing into bed at the end of the day. Bill says, “Sometimes he even beats me to bed and I have to ask him to move over so I can get in!” Bill’s daughter, Dawn adds, ” I would like to thank you for giving my Dad the opportunity to adopt Zack. I believe they are a perfect match! They are inseparable, great therapy for each other.” 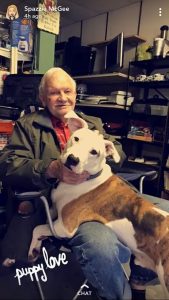 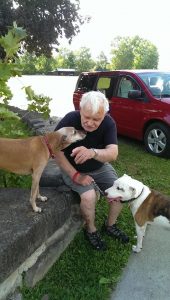 Time only moves in one direction and no amount of money on earth can buy time back once it’s spent. The old adage says, “Change is good.” But some changes are so sudden and irreversible, they can upset even the most level-headed of us. All of us at TASP are glad that Mitch’s dogs are finding their own lives now. It wasn’t easy for them to adapt after all the years they shared with Mitch, but thanks to the commitment of Mitch’s circle of friends and the response from the community, all of her dogs are safe and loved. We hope to report on the final placements for Sadie and Mallory soon, and with that, we will all know Mitch can finally rest in peace knowing her “kids” are going to be alright.

Join the Fun With TASP! Events Coming Up Soon…..
Vet Sci 101 – The Scoop on Poop